An oh-five-hundred start this morning. As in oh-my-gawd-it’s-early. By five-twenty we are barreling down the road. And what a road! Ah, the views… to not share with anyone as wife and small Beers go instantaneously back to sleep. At least I am available for sunrise over Queensland.

To be in pole position for such glorious daybreak, we awoke in Toowoomba. That is to say Mr Beer awoke whilst the others became vertical and ready to go. And by “ready to go” I mean fully in character to be extras in a zombie movie.

Next time one travels around the world, do remember to bring along a ‘morning person’ to keep one company. [Sigh]

You’ve not heard of Toowoomba? Where have you been dear reader?! TW is a lovely, leafy Queensland country town set out on a handy grid system. It’s still got a sort of yesteryear feel with disparate and unique shop fronts along its central streets with parks laid out in leafy suburbs whilst retaining full Aussie flavour (see piccy below). 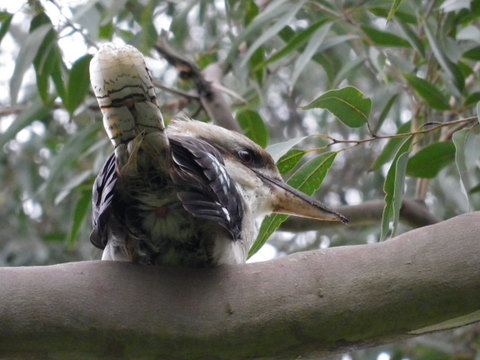 It’s also right at the apex of the Great Dividing Range. (This is geographically significant folks, so stay alert here.) Rain falling just a few streets east from Chris & Lea – our lovely, generous hosts – will, at some point after hitting the ground, end up in the Coral Sea and greater Pacific. Rain falling on their street will eventually find its way to another ocean. (The one south of Oz, can’t remember what it’s called, feel free to look it up. Oooh, I just have: it’s the Great Australian Bight.) Hence Great Dividing Range. Remember kids, it’s a major topographical feature not a huge cooker that people are of split opinion about. It’s a watershed. (This means you can swear on one side but not the other.)

I find this geography fascinating. The stupified-zombified-heathen-passengers couldn’t care less. (I know it’s early, but – bless them – they don’t seem to care anytime. For all I know you’re probably about to give up reading as well?) Anyhoo, the road sluices down 600m in short order to the lowlands. You start off on the plateau and tip over the edge. It’s fairly dramatic already before you add in the spice of fully laden mining trucks descending the same carriageway. To prevent runaways, they are in low gear with brakes on forming slow-moving road blocks. Whilst good, safe practice for them it’s hair-raising* when you round a corner carrying some sped to find a two-lane metal wall ahead. Through magnificent wheelmanship – they were asleep, it’s my words against theirs – we avoid doom and zoom along the highway toward the Gold Coast. The sun illuminates the skies, the bats – flying-foxes – head home and the feathered day-shift fills the skies. By six it’s light and we are experiencing the Brisbane commute.

For such a wide-open country, they don’t half set low-speed limits. 100kph (60mph) on the motorway in the middle of nowhere. There’s very little to plough into so it’s difficult to comprehend why – say – 130kph would be any more dangerous. As ‘local’ Chris remarks, a 5.7L V8 Holden is overkill yet they all drive them. The law demands they are driven SLOWLY. The only people on the move are the giant trucks which hustle their behemoths along at a tidy clip. I set the cruise at 120kph and join in. 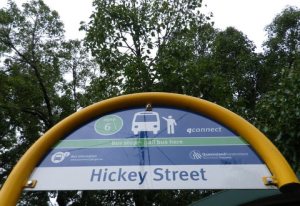 Hickey Street: all rain here next stop The Great Bight

An airport and 90minute flight later finds us descending through the clouds over Sydney. Morgan spots the ‘coathanger’ – as the locals reportedly call the iconic Harbour Bridge – which he declares to be “just like I imagined.” Luckily, this is a good thing.

A treat to ourselves also involves the ‘Bridge. Our apartment is on McMahons Point with a lounge view advertised as the “best in the world”. You could argue that last bit, but it’s pretty special that’s for sure. It better had be, it’s a day and half of travel budget a night. Luckily, Sydney is dirt chea… oh, it isn’t. It’s REALLY expensive.

* Clearly I am employing a well worn cliché to convey the frightening sensation of encountering a big truck in the dark. However, since have no actual cranial hair to raise personally you’ll have to interpret the feeling in your own fashion. I was going to say “papped myself” but that’s not true either. I believe I may have ‘touched cloth’ during the moment, but no more than that. An underpants changed was not immediately required.