Spoilier alert: there is nothing glamorous about this blog. (Well, okay, the last line is a tease, but that’s all.)

Sat here in a 4th floor Hilton eerie the Thames is all but invisible due to the light pollution flooding from empty offices, distribution centre truck parks, the QE (Dartford) Bridge with its 4 lanes endlessly streaming traffic with headlights aglow and all manner of electric light.

There is even a corking full moon yet it’s somewhat wasted on these industrial lands of Norf’ Kent innit. So much so that it has finally given up competing with man made illumination and skulked orf behind the clouds. 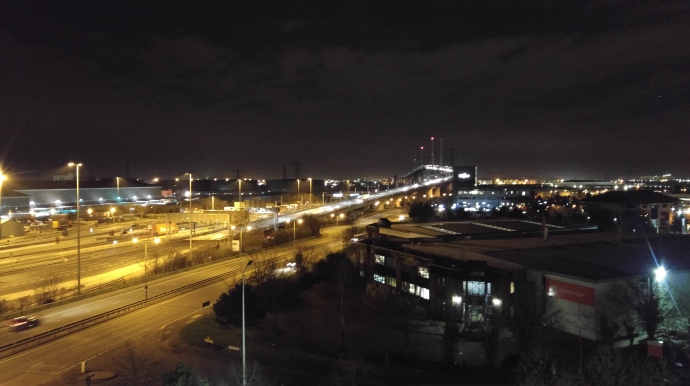 Opening the window a crack – restricted, one imagines, in case I get an irrepressible urge to climb onto the ledge and toss myself off* – the sound of tyres thundering on tarmac rushes in to greet me. Thus the scene is robbed of any potential Blade Runner romance. Whilst it’s no war zone, granted,  it is more than a little dystopian. I count the lanes for traffic. Including the convoluted Dartford Tunnel layby and dual carriageway parallel to the M25  there are 16 or so. Local boy racers are re-enacting Fast & Furious scenes nearby in some seriously expensive motors replete with race-spec exhausts. (I don’t imagine it’ll be girl racers, do you?)

By day I am working in an office that is a pebble-lob-over-the-security-fence away from the Thames Estuary. As it was sunny I strode out at lunchtime and with some difficulty found my way to the shore. Having visited here at least 1/2 dozen occasions the locals have never, never, mentioned the mighty waterway lapping the shore the other side of their wall. I had to find my way over the embankment to prove it existed. Their building has a fully glazed side that overlooks the dual carriageway. Behind them is this:

I must be odd. I want to sit and watch the world float by. Everyone else is hell bent on getting a pre-packed sandwich from Asda and SnapChatting.

*I didn’t. I had a hot bath and a cup of tea instead. Then watched SS-GB on iPlayer.

We head to Japan & South Korea soon. How will it compare?