Loyalty schemes: what a time to be alive!

Like most mortals these days I have membership of various loyalty schemes: supermarkets, airlines and such. Diligently and routinely offer my credentials when purchasing? Tick. This, of course, is a triumph of human gullibility over the understanding of, say, mathematics. Willingly partaking because getting something for nowt is winning, right?

Knowingly complicit in this sham I actively avoid seeking out the cost/benefit analysis due to… what exactly? Well, a fondness for not crying because of the futility of existence and a strong aversion to peeking behind the curtain of 21st century capitalism for starters. Depression stalks me all to readily without actually, intellectually confronting, knowing and internalising how little value these scams are.

Did I say schemes? I meant scams. Or was it the other way around?

Slartibartfast: Perhaps I’m old and tired, but I always think the chances of finding out what really is going on are so absurdly remote that the only thing to do is to say “Hang the sense of it” and just keep yourself occupied. […] Science has achieved some wonderful things, I know, but I’d far rather be happy than right any day.
Arthur Dent: And are you?
Slartibartfast: No. That’s where it all falls down, of course.”

Douglas Adams (1979). The hitchhikers guide to the galaxy, published by Pan
Books. Chapter 30, where Arthur Dent and Slartibartfast discuss the possibility of a
greater meaning.

In the last few days though, two organisations – in particular – have twitched the nib on the irkometer to spike the graphs. Step forward Hotels.com and IHG Rewards Club.

But wait! As a regular traveler, surely a well chosen loyalty scheme makes sense? Yes, yes. It sometimes does. Over countless nights/miles/coin spent away from home enough credit has been accrued to claw back an occasional night gratis, er, away from home. Woop – and indeed – woop. Ride that system boy! Live that dream!

And yet the irking is real. The game is not being played satisfactorily. It flicks the needles not because of the what, but the how.

Consider Hotels.com. They send “exclusive 50% off” stuff for “one day only” on a tediously frequent – pretty much daily – basis. (For brevity, not to mention grammar pedantry, I will omit their use of exclamation marks. Not because they are grammatically wrong, more that the sheer frequency gives me a headache. Like CONSTANTLY being in a “HIGH FIVE!” environment. As Tiggerish as I can be for extended periods, extreme punctuation kills me. Not quite as bad as the forced smiles we are forced to witness at the end of strenuous musical theatre number. Obvs. (I only mention this for context. Still, a kind of PTSD ensues.)) Noted also are the promise that “Lower prices that aren’t available to everyone.” Really? Perhaps a lone goat herder in Mongolia doesn’t qualify during a particular phase of the moon? Maybe ‘that’ death row inmate in some deep south US penal colony on a random Thursday every third leap year? Do tell.

“I remember the day distinctly, it was the only day that year that Allied Carpets were not having a sale.”

I wouldn’t mind so much but these #superduperdeals – made that hashtag up, but you’d be forgiven for thinking otherwise – are always applying to somewhere I’m not going to.

When I’m not going there.

It’s almost as if the marketers are trying to tempt me to spend money… Imagine!

(My punctuation that one.)

So what has squished my gooseberries today? Some algorithm has robotically noted that I’m off to London this week. True, I dabbled with the idea of making an overnight of it. Cue eMail “offers” and “50% discounts” that are frankly nothing of the sort. Still thinking of going? Aw, feck off. Am just going to leave a screenshot below from earlier this year. You will note the USD – really, USD? – I saved by being in the club. 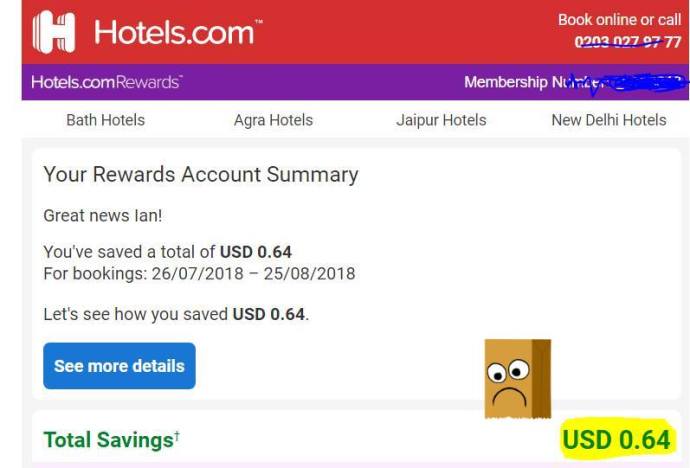 Then IHG folk are, if anything, worse.

If you travel frequently yet sporadically on business, you often get to choose your digs. So choose IHG, right? Lots of choice. Sort of. However, the method of booking may well be dictated by employer/contracts/client. IHG Rewards are only awarded if you book how they want you to. Spending a calendar month at one of the properties are we? Computer says no. Circa zero benefits pal because you didn’t play properly when booking. IE: Your loyalty as a customer is instantly disregarded by a loyalty app.

The scheme is, putting it mildly, fickle. The marketing comms with their impossibly handsome stock-photo models almost goading. Merely applying for their credit card will turn me into a points laden Brad Pitt! OMFG, my instant ubercool lifestyle if I lay my head at X for a night! And so on. Am not usually schmuckish enough to fall for these “deals”. Usually.

Yesterday, I shamefacedly fell for “Our biggest thank you yet” which involved this:  “simply Tweet or Instagram a picture at home or at any IHG hotel using the hashtags #HomeWithIHG, #RewardsOffer and #Ad and including @IHGRewardsClub. Then, visit ihgrewardsclub.com/ClaimMyPoints to get your 5,000 points.”

Dear reader, I avidly pressed buttons, hashtagged photos with verve, sacrificed a rare mammal and – yay! – drank its blood, got a tattoo, licked gravel, electrocuted my plums and undertook several other unprintable rituals. The result? A marketing TRIUMPH for the deities of IHG. Behold (below), 15 people like it. FIFTEEN.

Before I take the rest of the week off, I check my account with puppyish gaiety.

To whit, nothing has happened. Wot no points? And I still don’t look like a film star…

Only, in both cases above, this is meant to be a fair exchange. Right loyalty schemers? Well, it just isn’t.

Luckily, for the more rational moments – or perhaps whilst on a transit delay having lost the will to live – you can check what’s worth what.

Try: https://thepointsguy.com/ or – loathed by many in the industry – https://www.moneysavingexpert.com

Right where’s that myWaitrose card? After venting my spleen I can feel a pointless drive to town to get a free coffee coming on…